Tens of thousands of homes and businesses were without power on Thursday and winds gusting up to 50 miles per hour have created the highest risk of wildfires in Southern California this Thanksgiving weekend…. 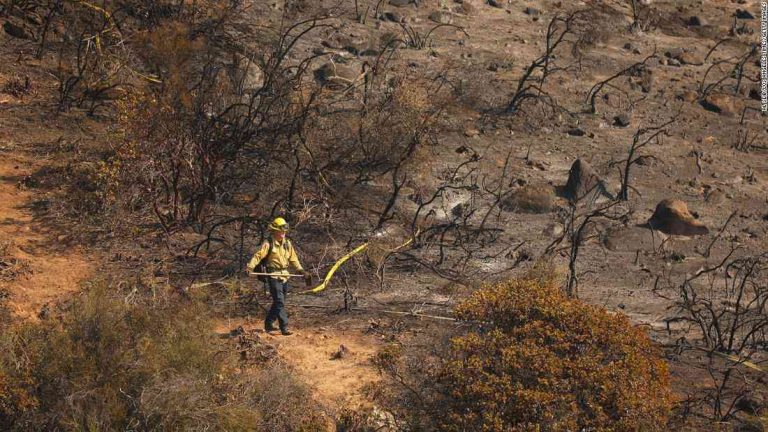 Tens of thousands of homes and businesses were without power on Thursday and winds gusting up to 50 miles per hour have created the highest risk of wildfires in Southern California this Thanksgiving weekend. Air quality is expected to be unhealthy for sensitive groups, and a “red flag warning” for critical fire conditions is in effect for Santa Barbara and Ventura counties, where drought-stricken vegetation could fuel fires. Authorities also fear some people may defecate in their own backyards as the low humidity makes lawns and riverbanks more easily combustible.

The Woolsey fire — started by a vehicle that crashed into a power pole on Nov. 8 — is still raging in Simi Valley, destroying at least $80 million in property. About 220 structures have been lost and thousands have been displaced. Meanwhile, on Wednesday, the new Camp Fire took the lives of 15 people in Northern California, marking the deadliest and most destructive in the state’s history. Over 100 homes have been destroyed, and more than 20,000 people were evacuated in Paradise.

Water levels were more than half a meter lower on Thursday in Malibu and western Los Angeles County than normal due to heavy rains and a meager soil makeup, according to NBC News.

Tens of thousands of people across the state are taking the threat seriously: The Red Cross reportedly set up 40 shelters, the second-highest number it has ever handled after a 2017 hurricane. The emergency team, which on Thursday night said it has delivered 10,000 meals, had set up 803 shelters in Los Angeles, Orange, and Ventura counties.

My heart is breaking for all the California families without homes. If you or someone you know needs assistance, we know where to find you. Find us at LAhelpinghands.org #CALFIRESommer pic.twitter.com/g1yRlJqhTq — CAL FIRE (@CAL_FIRE) November 9, 2018

Expecting a longer period of low humidity, “We are getting into the peak [weekend] of our fire season, and then that will stay in place all the way through the summer months,” Craig Rains, a fire official with the Pacific Southwest Coordination Center, told ABC News.

Read the full story at The New York Times and NBC News.