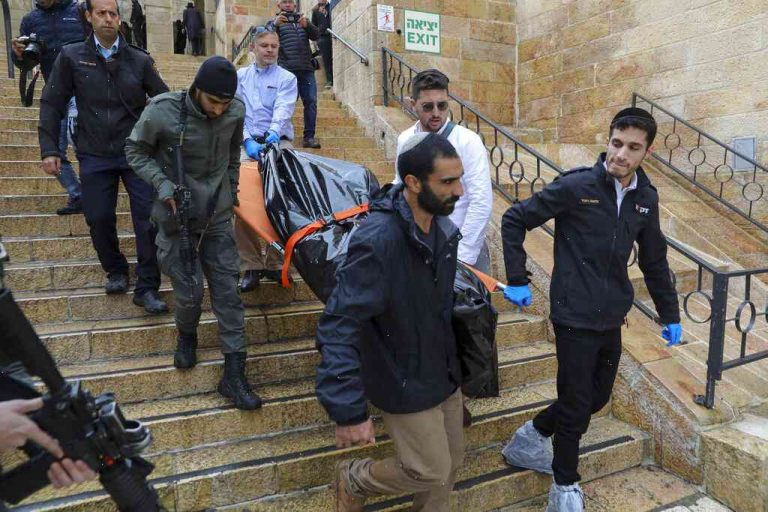 The body of an Israeli man killed by a Palestinian gunman in Jerusalem on Wednesday was identified as a retired colonel from East Jerusalem.

Rizwan al-Faqih was killed as he and another Israeli were driving to meet their friends.

Palestinians say one of the passengers tried to stop the gunman.

The gunmen attacked the Jewish seminary in Har Homa as Israel expanded its settlements in the occupied West Bank, where it has long resisted pressure to stop them.

Photo: Associated Press / Tal Shahar Police and emergency crews work at the scene of the attack

He said that “innocent men and women were killed because of the occupation’s expansionism”.

In his brief statement he did not criticise Islamic Jihad or any other group for the attack.

Video caption “Was that good or bad?”: Syrian cleric reacts to Israeli attack

An Israeli police spokesman said the gunmen took aim at the vehicle, killing the driver.

Photo: The Associated Press / Tal Shahar Police inspect the car in which the attacker was caught

He said the attacker, Mohammad Otryat, was detained “after turning himself in”, and said he had five previous convictions.

Mr Otryat has denied involvement in the shooting and an Islamic Jihad statement said its “implementation was taken in response to Israel’s expansionist act”.

In a statement on Friday, the militant group described Mr al-Faqih as a martyr and said a “heroic operation” was carried out.

The attack happened near the eastern boundaries of Jerusalem, on the eve of the Muslim holiday of Eid al-Adha.

It was the third consecutive day that such an incident has taken place in the Jerusalem region.

Last week, a Palestinian stabbed and killed an Israeli man on a light-rail train as it was traveling between Jerusalem and the Jewish settlement of Mishor Adumim.

No-one died in that attack, but at least 13 people have been killed during the violence, according to Israel’s Intelligence Ministry.

Two hundred Palestinians have been killed – including 60 who were carrying out attacks – since violence began in October 2015.

Israel says that since the outbreak of the West Bank unrest between October 2015 and October 2016, it has blocked around 27,000 tonnes of weapons from entering Gaza, from the Israeli armed forces.

Of these, “half of them were loaded up in two army truckloads and returned within two hours” to the country’s security directorate, the ministry said.

Nicaragua election: How did it go?