Nicaragua election: How did it go?

Image copyright AFP Image caption Maria Ortega has been in power since 2006 Nicaraguan President Daniel Ortega has won re-election in disputed polls where international observers said they were “appalled and alarmed”. Nicaragua’s electoral… 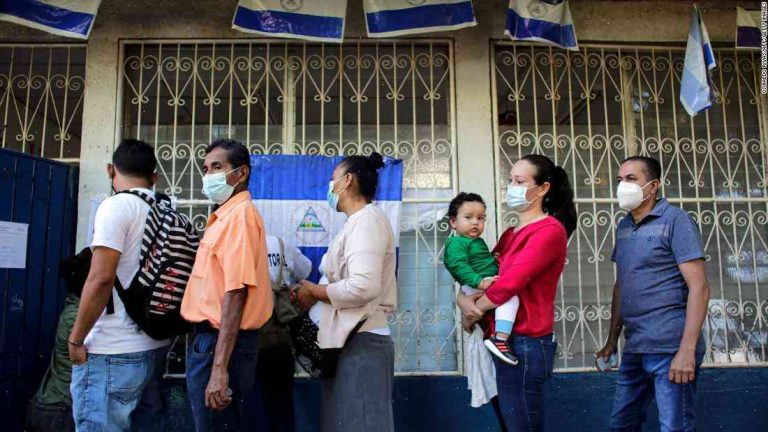 Nicaraguan President Daniel Ortega has won re-election in disputed polls where international observers said they were “appalled and alarmed”.

No clear winner was declared after the month-long race, which was marred by government-sponsored violence.

The opposition says it was rigged.

The UN has said it will launch an investigation into the poll’s credibility.

On Monday, election council officials rejected an analysis by the Organisation of American States (OAS) report, saying the allegations were without merit.

The review of the 16,000-page report showed that the election was marred by violations including “mass government surveillance” and “measures taken to reduce votes cast by women, people with disabilities and social security recipients”.

In a statement, the OAS said the Nicaraguan government had “greatly impaired the public trust and invested every resource to intimidate voters and keep its opponents off the ballot papers”.

Photo caption Nicaragua election: Do you think it was fixed?

At a news conference, she said the organisation had “turned its back on freedom of expression” and had become a “caricature of democracy”.

“Nicaragua has been hunting cattle in order to herd herds, and it doesn’t work,” she added.

However, a series of mostly peaceful protests, organised by the opposition, had forced the OAS to suspend the evaluation process.

In November, the council said Mr Ortega had won 55.27% of the vote, with second-placed contestant Tomas Borge getting 12.71%.

Independent monitoring groups had questioned both those figures, though some of them said they were still uncertain.

Why are Nicaraguan elections controversial?

The election occurred amid an escalating crisis in Nicaragua.

In November, protests erupted against the re-election, days after Mr Ortega marked his 30th year in power.

Supporters and opponents claimed the elections had been rigged. The presidential campaign was marred by murder, rape and torture, alleged human rights activists have said.

The opposition and its backers have called the election a joke, an exercise in poll fraud – though some UN officials have acknowledged it was a close race.

Ahead of the vote, a convoy of jeeps was caught on camera carrying voters to register at several polling stations near Mr Ortega’s home.