Michael Bublé made his return to the stage Friday night at the US Bank Arena. Despite the sweltering heat, the singer made a valiant effort to wade through his acceptance speech in a generous… 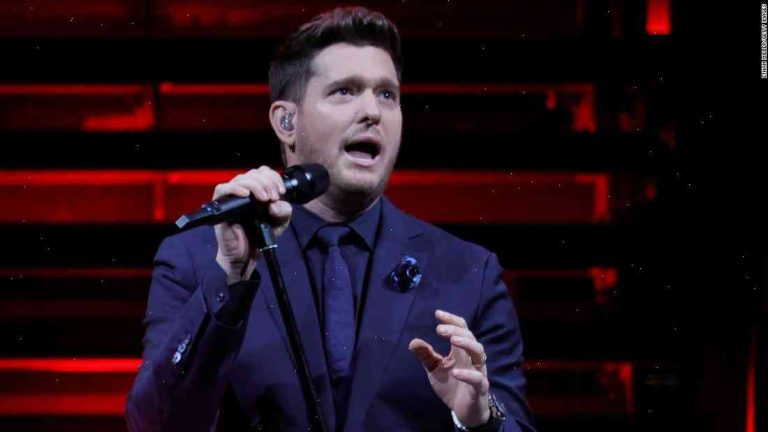 Michael Bublé made his return to the stage Friday night at the US Bank Arena. Despite the sweltering heat, the singer made a valiant effort to wade through his acceptance speech in a generous voice that spoke directly to fans who were grateful to be in the building. “I know you guys work hard all year and you deserve to be here,” he told them.

The crowd immediately swayed, no doubt remembering that it was Bublé’s 2009 concert that inspired Grammy Award-winning song “Home,” a heartrending ballad about two brothers grappling with the crushing grief of the loss of their mother.

Bublé debuted a new song at the show, “Shake Every Wave,” which he said was originally a Christmas song, but added it would make a great club track at any time. (It’s a nice shout-out to the Saddle Creek record label, which recently launched its own club night, Curtain Up).

For anyone who’s attended an event by the standards of a 12-piece, five-man band, it was a shock to notice that Bublé, whose comeback from son Noah’s cancer diagnosis in 2016 was an emotional journey, was sharing the stage with several people in jeans and ball caps, and wife Luisana Lopilato, who’s a visual artist, was onstage with him. They announced on their Instagram accounts that she would be guest-vocalist of the evening, but Bublé, a formal dresser, wore only white suit pants, while she dressed in black skinny jeans and a dress jacket.

“Shake Every Wave” sounded sweet and hopeful, but the song didn’t mean a great deal to me because I honestly don’t remember the last time I listened to it. All I remember is that I fell in love with “Home” back in 2009. (There will forever be some ambivalence about whether that song is any good.)

It’s possible that Bublé will return to the stage with more guest-mentors, which is only fitting considering the current headliners have guesting to thank for their own well-crafted stage shows. Despite how well he’s managed to plug into the American pop culture zeitgeist — after giving both Ellen Degeneres and Diddy a run for their money with last month’s Duets — Bublé would do well to stay in touch with his own inner fan and call upon more enthusiastic musical sets from the likes of John Legend, Pharrell Williams, Usher and Gwen Stefani.